As we reported on July, a plan to gather curiosity seekers to ‘Storm Area 51’ has gotten quite a bit of attention, and has reached mega-viral status.

Admittedly, the event page was started out as a joke by a man who doesn’t even live in the United States, where the secret military base is located. However, the event seems to have taken on a life of its own, as now two million people have clicked “attending” on the official Facebook page.

So when we storming Area 51? pic.twitter.com/NSDdpbOBdB

While most of the posts on the page are obviously jokes, it is unclear how many of these people are trolling, and how many will actually show up.

If anyone does come, they will meet at a nearby tourist trap called the “Area 51 Alien Center,” and make their entrance plans. 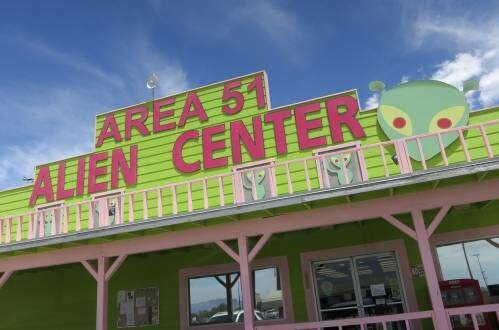 my new alien trying to play it cool when we get pulled over leaving #Area51 #area51memes pic.twitter.com/zqdOxVnDGY

For his part, Lazar has made a statement warning his supporters to stay home on September 20, when curiosity seekers are scheduled to storm the gate.

In a statement that was later relayed to Joe Rogan’s several million social media followers, Lazar said that Area 51 is not even where the aliens and alien tech were stored when he worked at the site over 30 years ago.

This is how I envision the Battle of Area 51 going down.
#Area51memes #Area51 pic.twitter.com/M4JIF603s9

In fact, Lazar says that the actual alien facility was called “Site 54” and was located south of the notorious Area 51 base. Still, Lazar has said that it is very likely that the government has moved the location of the site, especially considering the release of his Netflix documentary.

When you raid Area 51 and find highly classified government secrets but no alien homie to steal and protect #Area51memes #Area51 pic.twitter.com/l9y3oKj47S