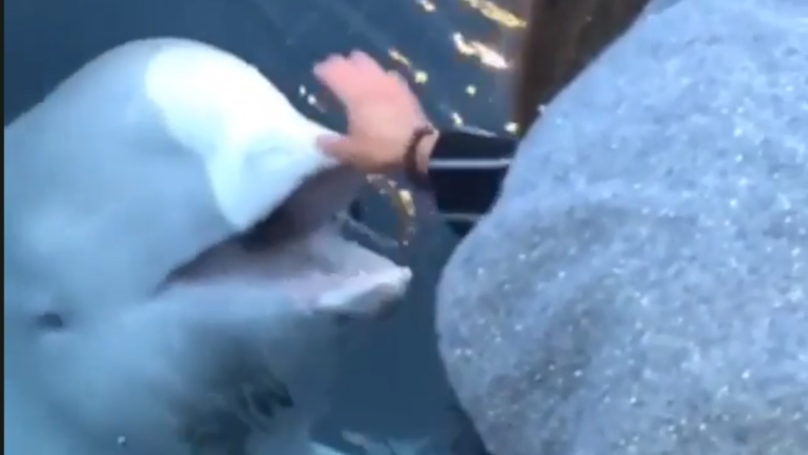 A beluga whale that is suspected to have special training from the Russian government reportedly escaped from captivity and was spotted in the waters along the coast of Norway. Norwegian fishermen first reported spotting the whale near Hammerfest, and said that they saw the words ‘Equipment St Petersburg’ on it. The whale was also reportedly fitted with a harness and mount that could hold a camera or perhaps a weapon.

Locals flocked to the area, hoping that they could get a glimpse of the incredibly intelligent animal. One of those locals, named Ina Mansika, was able to see the whale, but she dropped her cellphone in the water when she attempted to get a picture. Miraculously, the whale retrieved the phone and brought the device back up to the surface in its mouth.

“We laid down on the dock to look at it and hopefully get the chance to pat it. I had forgotten to close my jacket pocket and my phone fell in the ocean. We assumed it would be gone forever, until the whale dove back down and came back a few moments later with my phone in its mouth! Everyone was so surprised. We almost didn’t believe what we saw. I was super happy and thankful that I got my phone back,” Ina told The Dodo.

The phone did not survive the ordeal, and was entirely broken by the time it was returned to Ina, but the feat was still amazing. Another friend managed to get the whole thing on film.

Some experts have speculated that the Russians are using these whales as spies.

“There is a lot of secrecy around these military projects, but a Russian researcher I have spoken to says she knows that the Russian defense has such whales in captivity for military training,” Audun Rikardsen, a professor at the Department of Arctic and Marine Biology at the Arctic University of Norway, told a local newspaper, according to USA Today.

Russia is not the only country involved in these types of programs with weaponizing marine animals. In fact, The Guardian reported that as of 2007, the US Navy was spending $14m a year on its marine program, involving 75 mine-sweeping dolphins.

Earlier this year, a man was swallowed and then spit out by a Beluga whale. 51 year old South Africa citizen Rainer Schimpf, who is a diver and photographer was swallowed by a whale while he was shooting footage of a sardine run off the coast near Port Elizabeth Harbor in South Africa.

“I was just holding myself and bracing myself and calming myself down not to be panicked, and it worked out. He spat me out and everybody’s happy. My second thought was that obviously it can’t swallow me, because the throat of a whale is not big enough to swallow a human, and my next thought was it’s most likely going to dive down with me,” Schimpf added. 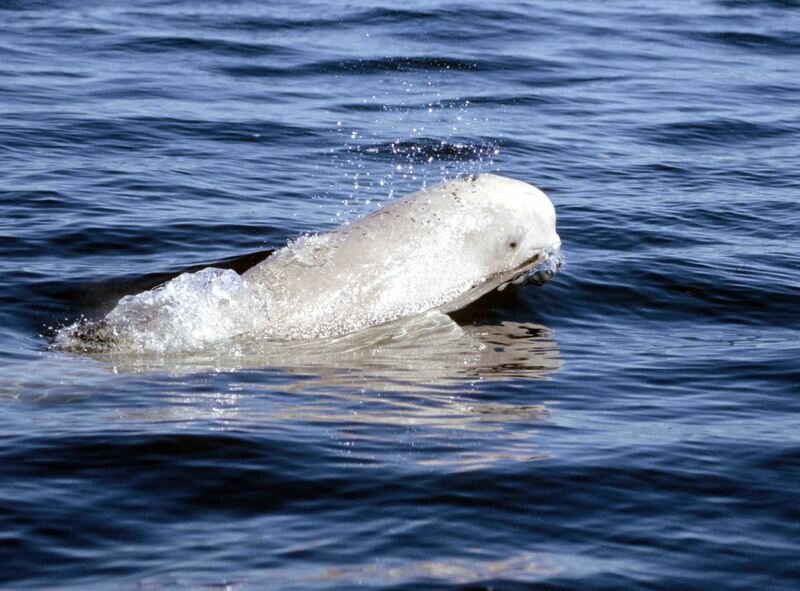 Beluga in the mouth of the Churchill River in the Hudson Bay, Canada / Photo Credit: Wikimedia

The majority of belugas live in the Arctic Ocean and the seas and coasts around North America, Russia and Greenland; their worldwide population is thought to number around 150,000. They are a migratory species and it is said that the majority of beluga groups spend the winter around the Arctic ice cap. Then when the sea ice melts in summer, they move to warmer river estuaries and coastal areas.

Belugas are one of the most commonly kept cetaceans in captivity and are housed in aquariums, dolphinariums, and wildlife parks in North America, Europe, and Asia.

“Between 1960 and 1992, the United States Navy carried out a program that included the study of marine mammals’ abilities with echolocation, with the objective of improving the detection of underwater objects. The program started with dolphins, but a large number of belugas were also used from 1975 on,” according to Wikipedia.

These are very intelligent creatures, which is likely why governments are so interested in using them for military experiments and projects. It is still unclear exactly what purpose the whale from this story served for the Russians.