The Water Abundance XPrize is a competition that offers large rewards to inventors who are able to develop breakthroughs that harvest water from the air. The most recent winner, in 2018, was a creation of two architects from California, David Hertz and his colleague, Rich Groden.

The pair won $1.5 million for their incredible invention that can produce at least 2,000 liters of water per day. This would be enough for roughly 100 people to live on.

Hertz and Groden were among nearly 100 teams who took part in this year’s event.

The two entered the contest with the team name “the Skysource/Skywater Alliance.” The device that they made is called “WeDew,” which stands for wood-to-energy deployed water system.

The invention uses a generator that imitates a cloud and then collects the resulting condensation in a container. This model is not entirely self-sufficient, as it needs electricity to operate. To take care of this problem, the engineers used a biomass gasifier as an energy source.

“It’s a carbon-negative technology. I think the future of technologies is going to be moving to this restorative, regenerative model that actually helps to repair the damage we’ve done,” Hertz told Fast Company.

Last year’s second place prize of $150,000 went to JMCC WING of Hawaii, who created an outstanding wind energy system that extracts water from the air.

There are numerous teams working all over the world towards this same goal, to harvest water from thin air. This is a very important goal, as roughly 2.1 billion people around the world do not have access to clean drinking water.

Researchers at the University of Akron in Ohio have been working on a prototype water harvester that could produce up to 10 gallons of drinking water every hour.

A new invention that is already being tested in some desert areas is able to extract clean drinking water from the air using a wind turbine. A company called Eole Water has implemented this wonderful invention in areas of the Abu Dhabi desert.

Tests on a ground-mounted prototype of the water making system have shown that the device is capable of producing up to 1,000 liters of clean drinking water on a daily basis.

The Eole Water wind turbine is also fully self sufficient, utilizing both wind and solar energy to power itself.

This is actually not the only invention of its kind, a number of new inventions to recently break news have similar technology, which enables devices to extract condensation from the air and convert it into drinking water. One device, named NJORD after a sea god of Norse mythology is actually handheld, and looks like a simple plastic container.

Another solution has come from MIT, where a team was able to come up with a way of turning salt water into drinking water.

The process uses solar power and is environmentally sustainable.

It was reported that the process can convert 2,100 gallons of salt water into drinking water in just 24 hours. 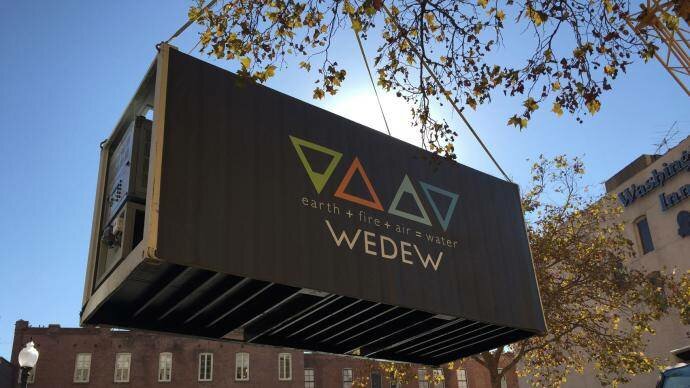 According to a full explanation from MIT:

Electrodialysis works by passing a stream of water between two electrodes with opposite charges. Because the salt dissolved in water consists of positive and negative ions, the electrodes pull the ions out of the water, Winter says, leaving fresher water at the center of the flow. A series of membranes separate the freshwater stream from increasingly salty ones.

Both electrodialysis and reverse osmosis require the use of membranes, but those in an electrodialysis system are exposed to lower pressures and can be cleared of salt buildup simply by reversing the electrical polarity. That means the expensive membranes should last much longer and require less maintenance.

The system is currently being tested in small villages throughout India and recently won the top Desal Prize for sustainable technologies.

According to estimates from the United States Defense Intelligence Agency, the world could start seeing massive water shortages within the next ten years. Figures from the agency suggest that water requirements will exceed supplies by 40%, creating huge water shortages by 2030.

This is by far one of the most important resources on the entire planet, not just for humans, but for every living creature. Inventions like this could totally change the fate of the world by ensuring that water remains abundant here on earth.