Albert Einstein, one of the most famous scientists of all time, known best for his theory of relativity, was also a philosophy, as well as a scientist.

Einstein had great insight into the human condition, and one of his most profound philosophical contributions was his theory of happiness.

While it was not known during his life, “the theory of happiness,” recently sold for $1.56 million at an auction in Jerusalem.

In 1922, Einstein was in Japan on a lecture tour and had recently received the good news that he would be winning a Nobel Prize win. Einstein did not have any money for a tip to give the bellboy, and during their encounter, the young man asked the scientist if he had any advice on how to live a happy and fulfilling life.

So, instead of giving the bellboy some change, Einstein wrote his theory of happiness down on a piece of stationery, noting that this note could be worth a lot someday.

The bellboy never cashed out, but the note was passed down onto his nephew who recently put it up for auction. 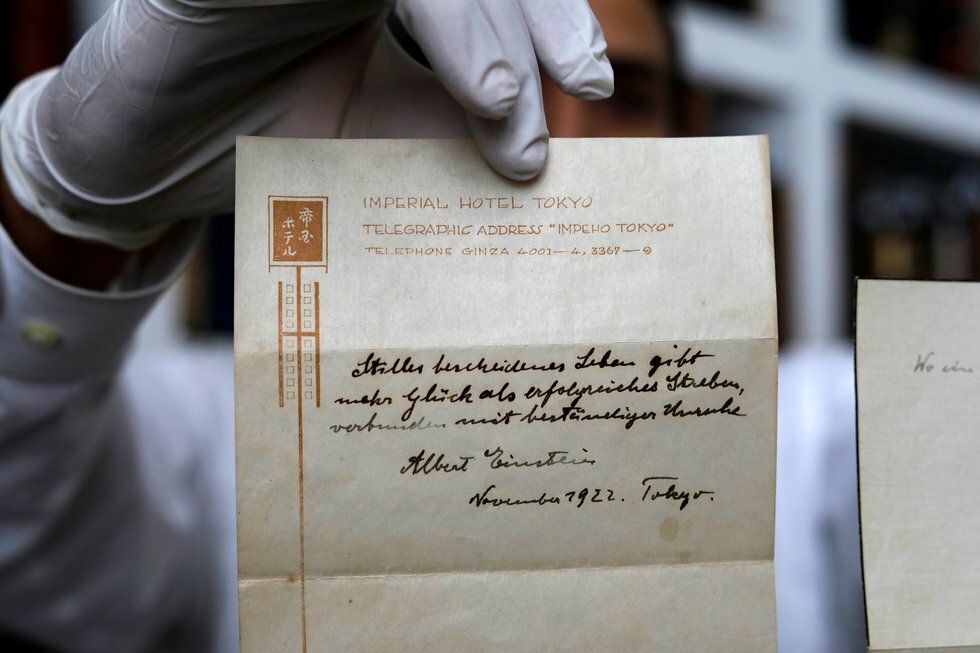 The note was very simple and very profound. It said, “A calm and modest life brings more happiness than the pursuit of success combined with constant restlessness.“

The auction was held in Jerusalem in 2017 at the Winner’s Auctions and Exhibitions, but the notes were only estimated to sell for roughly $5,000 and $8,000.

Einstein’s message to the young bellboy was short but incredibly profound. Doctors now know that stress-related illnesses are one of the leading causes of death in the world, but especially in the developed world where there is a culture of chasing material success.

Prolonged stress puts your body in a continuous state readiness for physical action. When your body has no time to re-establish equilibrium, it becomes overworked and your immune system weakens, making you susceptible to sickness. Many essential bodily processes are disrupted and your risk of health problems increases, according to Healthline.

“Your body’s fight-or-flight mechanism is a natural, life-saving system that’s highly efficient and effective when you have to use your muscles quickly. However, the stress of modern life can cause it to short circuit. If you’re under constant stress, rather than short-lived or occasional stress, the hypothalamus, a tiny region at the base of your brain, triggers an alarm that stays on,” Healthline says.

Einstein seemed to think that happiness had nothing to do with material wealth or success, and he would know, he had just won the Nobel Prize and was known all over the world.

People who are at the heights of success often say that material wealth has not made them happy, and they feel foolish for chasing it instead of nurturing the important relationships in their lives. Famous actor Jim Carey was once quoted as saying, “I think everybody should get rich and famous and do everything they ever dreamed of so they can see that it’s not the answer.”

Many people spend their lives unhappy because they are not rich and famous and they want to be, but many people who have gotten to that point quickly realized that it was not as good as they thought it would be. The grass is only greener on the other side.

It is true that for people living in poverty, a few extra bucks really does mean happiness. There are many people suffering in the world who need financial help.

Researchers estimate that the magic number is somewhere around $75,000 per year, which certainly seems rich to the average person.

However, once you begin earning more than $75,000 per year, your happiness does not increase any more, and in many cases actually decreases because you begin to set the bar higher for yourself and begin chasing more things that you dont have.