For decades, Area 51 has been a mythical place for conspiracy theorists and people who are interested in extraterrestrials or UFOs.

The site has remained a mystery because it is very well defended, but as we have been reporting extensively, over a million people have now responded to a Facebook event for a full-scale invasion of the secret military base. Plenty of people are exited about the plot, which is scheduled for September 20th, but Area 51 experts are saying that it is not a very good idea.

There has been a surge of interest in the military base after the release of the recent Netflix documentary film, Bob Lazar: Area 51 & Flying Saucers. Lazar has been an expert on the location for years, and even worked at the base for a period of time. In fact, Lazar was the first to blow the whistle on the site, but he was successfully railroaded by the US government and no one took him seriously until recently. 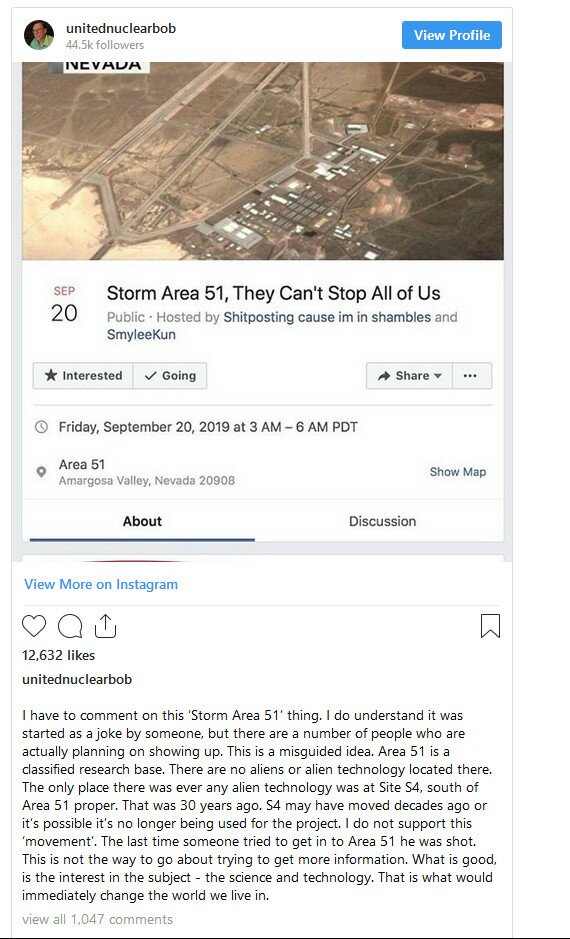 In a statement that was later relayed to Joe Rogan’s several million social media followers, Lazar said that Area 51 is not even where the aliens and alien tech were stored when he worked at the site over 30 years ago.

In fact, Lazar says that the actual alien facility was called “Site 54” and was located south of the notorious Area 51 base. Still, Lazar has said that it is very likely that the government has moved the location of the site, especially considering the release of his Netflix documentary.

Annie Jacobsen, author of “Area 51: An Uncensored History of America’s Top Secret Military Base told Fox and Friends that it would be impossible for protesters to reach the site.

“That base is so jealously guarded, both in terms of media and in terms of actual physicality. I don’t think the Air Force or any of the other military partners or intelligence community partners that are all working out there at Area 51 are gonna let anybody anywhere near the entrance to Area 51,” said Jacobsen.

Watch her interview below: