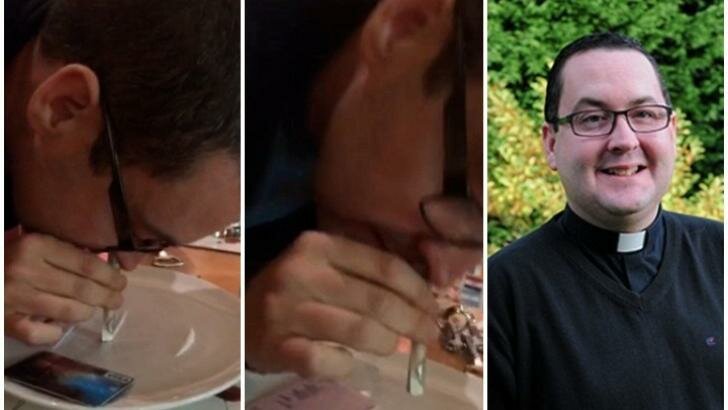 A Catholic priest in Ireland was all over the news after he got caught on video snorting cocaine during a wild after-hours party that he had on the church grounds late at night. Father Stephen Crossan reportedly brought a number of friends and acquaintances back to his home on the church grounds after he had already spent days drinking and partying with the group.

However, when the group arrived at his home, they were shocked to see that they were surrounded by Nazi memorabilia. Some of the guests must have been so offended by what they saw that they took out their phone and began recording the items in the house, as well as Crossan’s debauched behavior.

In the video, then 37-year-old Father Crossan can be seen snorting cocaine and drinking with Nazi memorabilia in the background of the shot. Crossan can be heard saying that he “really shouldn’t” as he looked over a plate of cocaine with a £10 note, but he decided to go ahead and give it a shot anyway. Little did he know that someone was filming the whole encounter.

The video was later leaked to The Sun, who published it along with a story by journalist Ruth Warrander.

Father Crossan admitted to Warrander that it was, in fact, him on the video using the d rugs, but the priest insisted that he does not have a d rug problem and that the antics seen in the footage were just a one time fling.

However, he did not have such an easy time explaining all of the Nazi memorabilia, which clearly represents a more serious conflict of interest. He didn’t just have the Nazi items in one room, they were all over the home, and a witness said that Crossan actually put on one of the Nazi caps and gave a Nazi salute at one point in the evening.

Farther Crossan denies being a Nazi, and claims that all of the memorabilia is in his home because he is a collector of historically significant items, and as terrible as the crimes of the Nazis were, they are still a part of history.

Crossan also noted that he was on sick leave from the church when the footage was taken. He said that he needed to take time away from work because he was suffering from severe depression. He claims that this is why he gave in to the temptation of drink and d rugs during his time of struggle.

Surprisingly, despite the massive media backlash that came in response to the leaked footage, Father Crossan won’t be in all that much trouble with the church. A spokesman for the bishop of the church told the Sun that Father Crossan would be supported by the church during his time of struggle. However, the spokesman gave no mention of the Nazi memorabilia that the priest reportedly owns, or the insensitive salutes that he was seen doing in front of witnesses during his wild night of drinking, d rugs, and hypocrisy.

Check out the video below: