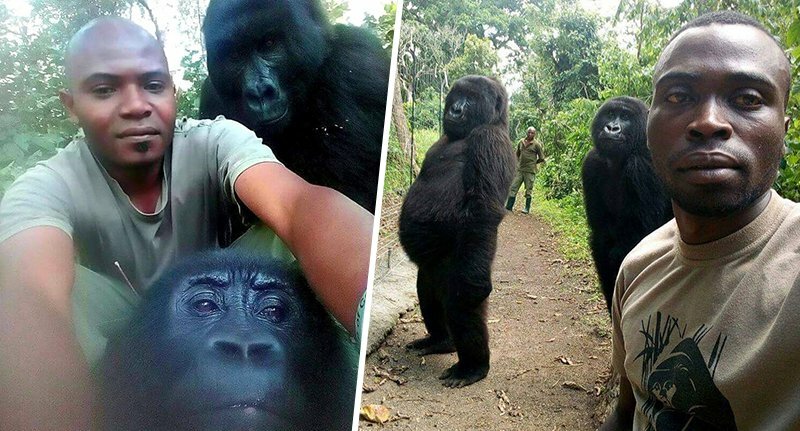 The park’s website says that the area has been ravaged by war for the past two decades, but there is a team of hundreds of rangers that protect the wildlife at the park.

“Virunga is protected by a dedicated team of over 600 rangers. These local men and women go through intensive training, risking their lives on a daily basis to safeguard the park’s exceptional wildlife, including the last of the world’s critically endangered mountain gorillas,” the website reads.

The rangers get along great with the animals at the park, especially the gorillas. They shared a group of photos on the park’s Facebook page earlier this week showing them hanging out in harmony with the gorillas.

One viral photo was captioned “Another Day at the Office”, and featured a ranger taking a selfie with two gorillas, Ndakasi and Matabishi.

ANOTHER DAY AT THE OFFICE…Photo: Ranger Mathieu Shamavu (c)NOTE: UNAUTHORIZED USE OF THIS PHOTO WILL BE REPORTED TO FACEBOOK

Posted by The Elite AntiPoaching Units And Combat Trackers. on Thursday, April 18, 2019

Another photo was called “Family Portrait” which shows park ranger Patrick Sadiki hanging out with Ndakasi and Matabishi. In another photo taken last year called, ‘Words to live by – Sagesse Intemporelle.” In this photo, one of the gorillas can be seen sitting on one of the ranger’s shoulders.

“When one is still young, it seems very simple to be a hero or a martyr. But as one marches on in life, one understands the price of a simple act of virtue, and only God can give us the strength to achieve this,” the caption read.

Posted by The Elite AntiPoaching Units And Combat Trackers. on Friday, August 10, 2018

Virunga National Park is located in the Albertine Rift Valley in the eastern part of the Democratic Republic of the Congo. It opened in 1925 and is among the first protected areas in Africa. The park ranges from 680 m (2,230 ft) in altitude in the Semliki River valley to 5,109 m (16,762 ft) in the Rwenzori Mountains.

Two active volcanoes are located in the park, Mount Nyiragongo and Nyamuragira. They significantly shaped the national park’s diverse habitats and wildlife. More than 3,000 faunal and floral species were recorded, of which more than 300 are endemic to the Albertine Rift including eastern gorilla (Gorilla beringei) and golden monkey (Cercopithecus kandti), according to Wikipedia.

WORDS TO LIVE BY- SAGESSE INTEMPORELLEFrom a Virunga National Park ranger, translated from the French:"When one is…

Posted by The Elite AntiPoaching Units And Combat Trackers. on Thursday, May 17, 2018

After the Second Congo War was over, confrontations between park personnel and rebel groups resulted in 80 park staff being killed between 1996 and 2003. Several armed rebel groups operate in the park, including Democratic Forces for the Liberation of Rwanda and National Congress for the Defence of the People. They make money by levying fees from local people for protecting prohibited activities inside the national park like poaching and clandestine fishing, logging, producing and smuggling charcoal, but also through armed robberies and kidnapping. In 2010, the United Nations Security Council estimated that the charcoal trade represents an annual value of $28 to $30 million. Violent conflicts also occasionally break out between park personnel and Mai Mai militias that reside in illegal settlements.

“Five rangers were killed in August 2017 near Lake Edward in a militia attack. Five rangers and a driver were killed in April 2018. Since the beginning of the armed conflict, armed groups killed 175 park rangers until April 2018. In May 2018, three tourists were kidnapped. The hostages were subsequently released unharmed. The park remains closed to visitors since June 2018,” the online encyclopedia said.

It is not clear who these park rangers are affiliated with or whether or not they are involved in any of the current conflicts. It is also important to point out that the gorillas featured in these photos are a very rare and endangered species and are among some of the last of its kind on the planet.

Poachers are a very serious problem all across the continent of Africa. Many poachers are even bold enough to sneak onto the private property of wildlife reserves and knowingly hunt for endangered animals in places where they are being protected. These types of ranger groups are developing across the continent, and in many cases, they are just there to help the authorities bring these poachers to justice. However, there have been some situations where conflicts have broken out, which have resulted in people on both sides being injured or killed.