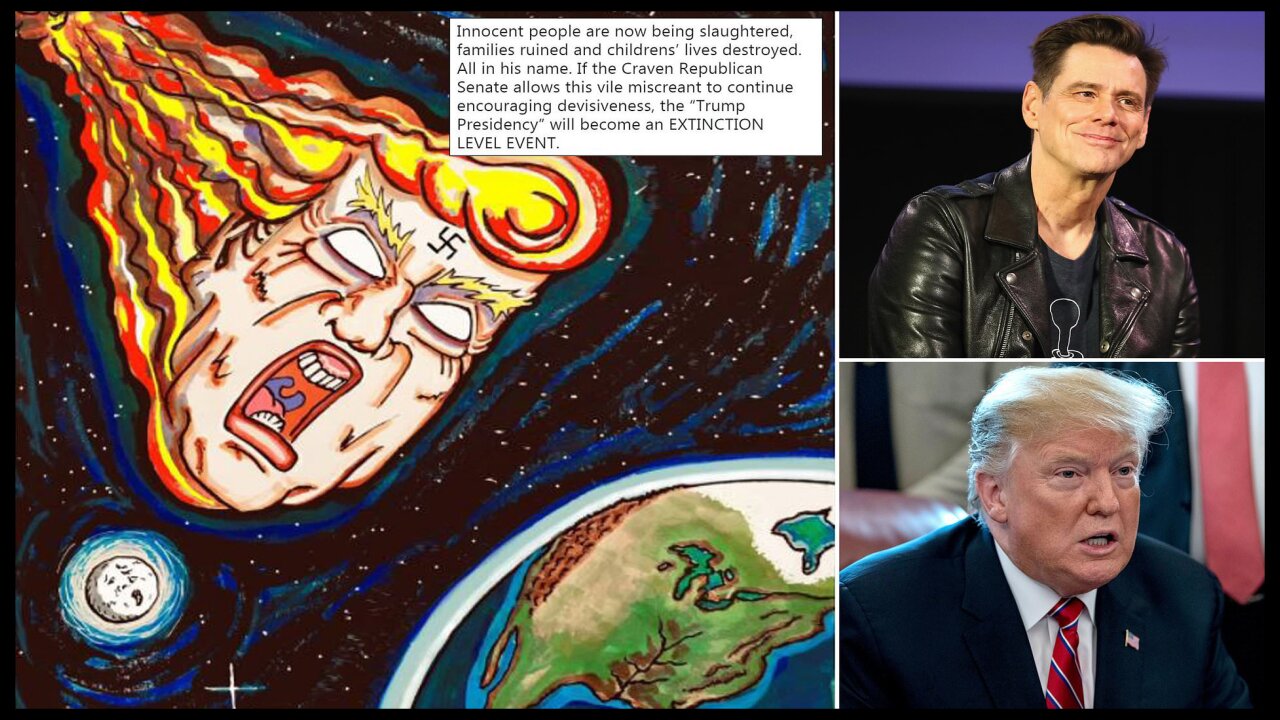 Actor Jim Carrey has never been a fan of President Donald Trump, but one of his new paintings has made the most bold statement yet. Carrey has become a bit of an artist in recent years and has used painting as a medium to express some of his political ideas. However, his most recent painting has sparked controversy, not only because it shows President Trump with a swastika on his forehead. In the painting, Trump is depicted as a fiery comment headed to destroy Earth.

In the caption of the painting that Carrey posted to Twitter, he said that Trump could be bringing an extinction level event. However, Carrey did not get into the specific policies of Trump that he was in opposition to.

Innocent people are now being slaughtered, families ruined and childrens’ lives destroyed. All in his name. If the Craven Republican Senate allows this vile miscreant to continue encouraging devisiveness, the “Trump Presidency” will become an EXTINCTION LEVEL EVENT. pic.twitter.com/RW4cHF0WDq

Carrey’s post with met was met with criticism from Trump supporters, but also many anti-war activists who pointed out that the problem goes much deeper than one president.

One critic wrote, “Sit there and blame while you paint. The blame games getting old, change the world and people’s perception!”

Another said, “Hi Jim, aren’t you, too creating divisiveness with content like this? Just on the other side of your spectrum?”

Carrey seemed to be placing blame on Trump for the recent tragedy in New Zealand, which he also made a painting for. The painting appeared to be a self portrait in which the actor was shedding a tear.

The vast majority of Carrey’s art seems political, like where he calls attention to Trump’s relationship with controversial political figure Roger Stone, and the administrations parallel with Richard Nixon.

The selfish, classless, and infantile behavior of goons like Roger Stone is the long-term effect of Gerald Ford's pardon of Nixon. We should have locked Richard Nixon up. Instead, he was allowed to retire in comfort inspiring a new wave of scumbags. pic.twitter.com/Tzmfou62fA

Trump appeared to respond to Carrey and others the following day.

“The Fake News Media is working overtime to blame me for the horrible (a)ttack in New Zealand,” the US President told his more than 59 million followers on Twitter.

“They will have to work very hard to prove that one. So Ridiculous” he tweeted.

Carrey seems obsessed with Trump, as most of his art focuses on the President and his administration.

Two and a half hours of manic logorrhea. Brought to you by the makers of Adderall! pic.twitter.com/YVNosBYp6F

In the following painting, Carrey accuses Trump of being an agent for China, North Korea, and Russia. The painting depicted Kim Jong Un riding Trump like a horse.

If Trump makes a nuclear deal w/ North Korea, it’s a FRAUD: China and Russia trying to keep their Prize Pony in the White House. When there’s a Nobel Prize for cowardice and moral desolation Trump will be the first to receive it. pic.twitter.com/MVdJr5zw9B

Last year, Carrey made some extreme comments directed at Republicans, saying that “These are not people you can deal with. You cannot be bipartisan with a criminal. A (r)apist needs to be removed, not negotiated with. These people are r(a)ping our system, they’re destroying it right in front of us.”

The actor also compared Trump to a cancer in his comments.

“These people have to be removed from our system because they’re bad for us. Trump is a melanoma, and anybody that covers for him, including Sarah Sanders, is putting makeup on it. It shows that there’s a deeper problem in this country, and that problem is greed,” Carey said.

“The African-American community has incredible grace in the face of this cancerous hate. They’re unbelievable. I don’t know how they haven’t burned this country down,” he added.

Trump has been faced renewed accusations of white supremacy in face of the New Zealand tragedy.

em>”the president is not a white supremacist. I’m not sure how many times we have to say that. To simply ask the question every time something like this happens overseas, or even domestically, to say, “Oh, my goodness, it must somehow be the president’s fault”, speaks to a politicization of everything that I think is undermining sort of the institutions that we have in the country today,’ Mulvaney told Fox.
Critics say that there has not been enough tough talk from Trump on the issue of racism and white supremacy, but his supporters believe that he is just not playing into the identity politics that so many Democrats build their careers on. The problems that Carrey is concerned about go far deeper than the political party that is in office, and is especially not limited to just one political party.