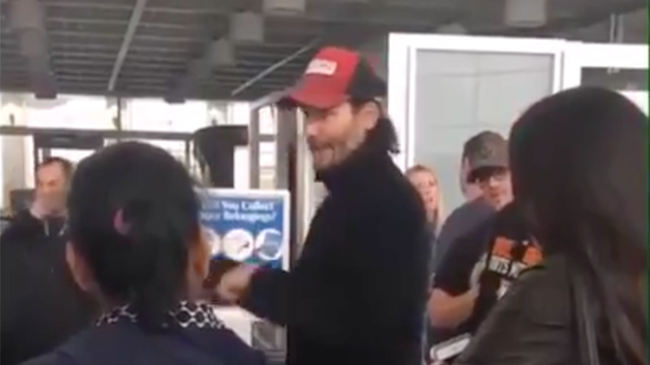 Keanu Reeves is one of the few Hollywood stars who is known for his incredible off-screen personality. Reeves is regularly popping up in the news and on social media, for random acts of kindness or humility, and he seems to have done it again.

The actor was on a flight from San Francisco to Los Angeles over the weekend when the plane was forced to make an emergency landing in Bakersfield, California. The flight reportedly had some type of mechanical malfunction, but luckily, the plane was able to land safely without incident.

Once the plane landed, everyone onboard, including Reeves, were stranded hours away from their destinations. Instead of trying to avoid the crowds or thinking of himself first, Reeves reportedly helped all of the other passengers get to their destinations, one by one.

“That time when your flight… almost crashes and you have to emergency land in a remote airport but at least Keanu Reeves is having as bad a day as you are. I mean, near death experience followed by fans annoying you for pictures. Doesn’t get much worse,” Amir Blum tweeted.

In one video that was posted to a variety of social media platforms by different users, Reeves is seen speaking to an airline representative on behalf of the people, negotiating for the best possible solution.

A spokesperson for SkyWest Airlines, an operator for United, told Yahoo, “SkyWest Flight 5223, operating as United Express from San Francisco to Burbank on Saturday, March 23, diverted to Bakersfield due to a mechanical indication. The flight landed safely without incident in Bakersfield. Passengers deplaned normally at the gate and were then transported via ground transportation to Burbank.”

Keanu Reeves Plane Got Diverted To Bakersfield. He had to take a van ride with 5 other passengers to LAX. Thank freebrianrea for the reportage👍👍 pic.twitter.com/xCvnnk9Y8h

Reeves then rode with some of the passengers in a van to Burbank, and many of the occupants recorded the adventure and posted the videos on social media.

The following are some videos showing Reeves negotiating with airline employees and helping passengers with logistics.

#keanureeves Meanwhile they got a van to transport them to LAX and Keanu provided educational info re Bakersfield thnx freebrianrea pic.twitter.com/L8mkNOrH8R

The caravan even stopped at Carls Jr. for a meal with the actor.

#keanureeves They stopped at a Carl's Jr. On the Way to LA
Thank freebrianrea pic.twitter.com/icGfqybtoO

There are too many stories of celebrities who think they are better than everyone else, but Reeves is one of the few who has not let the fame and fortune go to his head. Many of us have come to expect harsh behavior from celebrities, so people like Reeves who are actually decent humans tend to stand out.

During his younger sister’s battle with cancer, Reeves became involved in cancer charities and has been supporting them ever since, but he has kept his donations out of the news.

His private foundation funds cancer research and treatment for children, and he doesn’t even want any credit for it.

In 2009, Reeves told the Ladies’ Home Journal that, ”I have a private foundation that’s been running for five or six years, and it helps aid a couple of children’s hospitals and cancer research. I don’t like to attach my name to it, I just let the foundation do what it does.”

According to people who have worked with Reeves, he is one of the most generous people in Hollywood.

“Every day for the last few weeks of filming, Keanu treated the stagehands and grunt workers (including myself) by taking us out for free breakfast and lunch. He was genuinely a very nice guy to work with. Since then, I’ve worked on about 30 different sets and have never met an actor as generous and friendly as him,” one crew member posted on Reddit during a conversation about the actor.

He was even rumored to give a stagehand $20,000 after hearing that he was struggling with money problems. He was also said to have given each member of the special effects crew Harley Davidson Motorcycles after “Matrix: Reloaded.”

It is not clear what type of aircraft that Reeves was traveling on this weekend, but Boeing has been having trouble with their planes recently, and have a large portion of their commercial air fleet grounded. Boeing has come under increased scrutiny this month after concerns of software problems in their new 737 MAX airliner models after multiple crashes that seemed to be caused by the same artificial intelligence mechanism that was designed to prevent stalling. Boeing has promised that the software has been fixed and that the 737 MAX is safer than ever.