Two young women were attacked and robbed by a group of men on a London bus, after they refused to kiss for the group’s entertainment. 28 year old Melania Geymonat and her girlfriend Chris, age 29, were approached on the bus by a group of four men who made comments about their sexual orientation.

The attack reportedly happened on May 30th, but footage of the incident was released to the media this week and quickly went viral across the internet.

The gang of men began harassing the woman about their relationship and insisted that they kiss. When the women refused, an argument broke out, which quickly escalated into an attack.

“They started behaving like hooligans, demanding that we kissed so they could enjoy watching, calling us ‘lesbians’ and describing sexual positions … The next thing I know is that Chris is in the middle of the bus fighting with them. The next thing I know is I’m being punched. I got dizzy at the sight of my blood and fell back. I don’t remember whether or not I lost consciousness,” Geymonat explained.

Some of the young men were as young as 15 years old, with the oldest perpetrators being 18.

According to the Metropolitan Police, the suspects accused of the assault have been arrested.

“They started beating me, I was bleeding all over – I was really bleeding”

Melania Geymonat tells @BBCMarkMardell on #BBCwato about how she and her girlfriend were attacked after a group of men demanded they kiss. pic.twitter.com/E3kRVLxQtA

“Four males aged between 15 to 18 have been arrested on Friday 7 June on suspicion of robbery and aggravated GBH. They have been taken to separate London police stations for questioning,” a statement from the Metropolitan Police said.

The police later announced that a 5th suspect, age 15, was also arrested in the days following the incident.

The victims have said that this experience has not scared them from being who they are in public, in fact, it has strengthened them.

“I was and still am angry. It was scary, but this is not a novel situation. I’m not scared about being visibly queer. If anything, you should do it more. A lot of people’s rights and basic safety are at risk. I want people to feel emboldened to stand up to the same people who feel emboldened by the rightwing populism that is, I feel, responsible for the escalation in hate crimes. I want people to take away from this that they should stand up for themselves and each other,” Chris said in an interview with the BBC.

However, the incident was still extremely traumatizing for the couple. Geymonat has said that she has been unable to return to work since the attack.

This incident highlights the constant threats of violence that people in the LGBT community face on a regular basis. The attack comes in the midst of Pride month, where people are encouraged to be open and accepting about the wide range of sexual preferences that exist in our society. 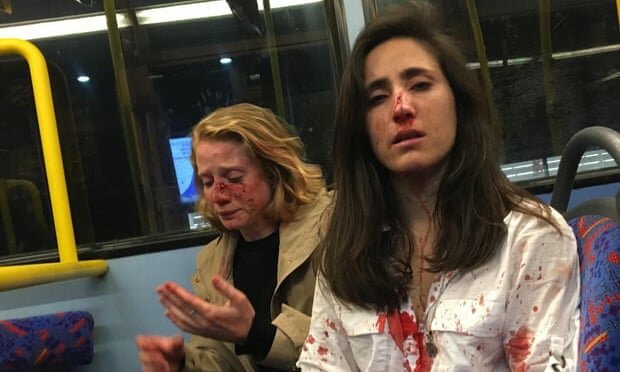 A report last month from the Independent indicated that the number of hate crimes reported to police across the country’s transport network has doubled over the past five years.

Religious hate crimes on the railways, tubes, and buses increased almost five-fold since 2013, while homophobic incidents saw a 200 percent rise. The number of hate crimes reported against LGBT people on the region’s transport system rose from 139 to 416 over a five year period. Activists in the community suggest that this rise in violence is in direct correlation with the growing popularity of nationalist movements.

Earlier this month, United States President Donald Trump became the first Republican president to recognize the LGBT Community’s celebration of Pride Month. Trump has been making efforts to position himself as an ally of the LGBT community since his campaign for president. However, many of his critics say that this is just an empty public relations ploy. His critics also say that he has not been friendly to the LGBT community while in office.

In the United States, a straight pride parade as an alternative to the yearly celebration of diversity has caught headlines and caused controversy.  The group was using the actor Bradd Pitt as the official mascot for the march, but after he asked them to stop using his name and likeness, they instead gave the role to right-wing provocateur, Milo Yiannopoulos.