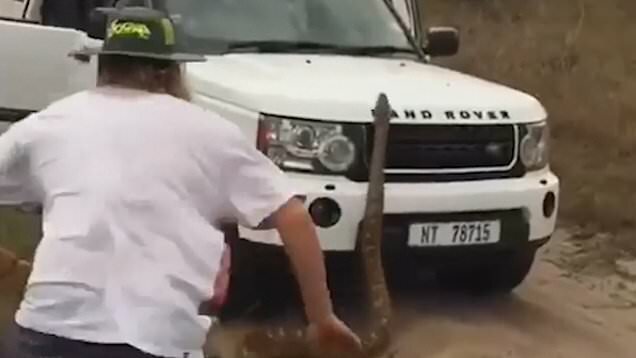 A viral clip to surface from Tzaneen, Limpopo, in Africa, shows a huge python slide its way into a vehicle, scaring the passengers inside and sending them running in terror. The vehicle was filled with tourists hoping to catch a view of some exotic wildlife, but they didn’t expect to get up close and personal with a huge 17-foot snake.

As the vehicle was traveling in a convoy of tourists on a dirt road near Durban, the snake came out of nowhere and began a direct path toward the vehicle.

Everyone on the scene ran as far as they could, but a brave cameraman decided to take the risk and film the strange encounter.

The driver then desperately tried to escape by putting the vehicle in reverse, but the snake continues to slither up the front of the car. 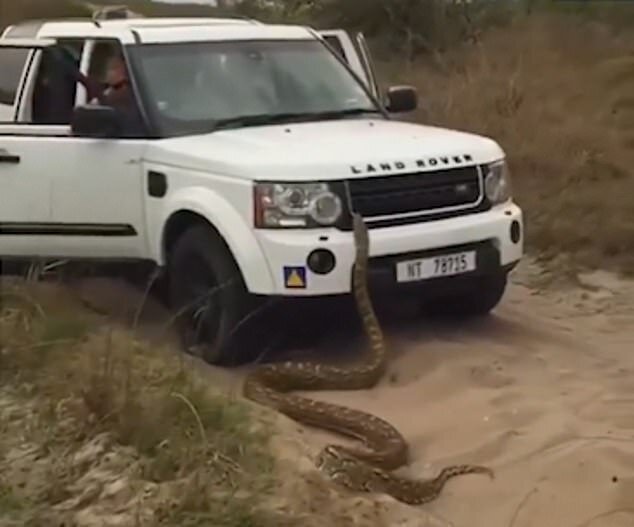 Clive Garrett, a marketing manager at fruit and vegetable giant ZZ2, told News24 that the incident happened sometime in September, although the exact date is unclear.

Garrett believes that the snake slithered into the engine compartment because it was attracted to the warmth that was emanating from the engine.

Garrett said that the snake seemed just as traumatized by the incident as the bystanders were. The snake was either so comfortable or scared while hidden in the engine compartment, that it refused to leave. Eventually, a crew was forced to entirely strip the engine so the snake could be safely removed. Once they were able to remove the snake from the vehicle, it was safely released to the wild.

Witnesses estimate that the snake was about 6m in full length. Pythons can be extremely intimidating, but they are usually not harmful or hostile towards humans. Only in very rare cases has someone actually been hurt or killed by this species of snake.