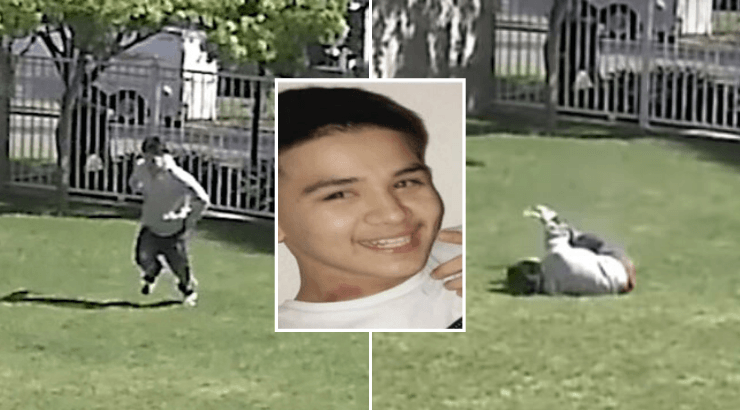 A newly released video shows a young boy being shot in the back as he runs away from police, casting doubt on the officer’s version of events. 16-year-old Isiah Murrietta-Golding was shot and killed by a police officer in April of 2017, but the officer claimed that he believed the boy was armed, but no gun was found after they searched his body.

Legal analyst Tony Capozzi was asked to take a look at the new video, and he said that it is clear that the officer crouches down and shoots as if he is aiming. At the time, the boy and his brothers were suspects in a local murder case, but there was no evidence for the boys and no warrant for their arrest. It is likely that they merely “fit a description,” which is usually an excuse to shake down anyone in an immediate vicinity of a crime.

Stuart Chandler, an attorney for the boy’s family, said that there was no indication that Isiah was armed, and no reason for the officer to believe that he was.

Prior to the shooting, Police attempted to detain Isiah in the parking lot of a shopping center, but he ran away before they were able to get him handcuffed. The initial encounter between Isiah and the officer was recorded by body camera footage, but for some reason, the video feed for the body camera cut out as the chase began, but the audio remained. Luckily, surveillance cameras from businesses nearby were able to pick up bits and pieces of the chase.

The shooter, Officer Ray Villalvazo, says that he feared for his life because the young boy reached for his waistband. However, the video evidence that has come to light since clearly shows that these claims are false, and that the boy was just running away from him.

In the body camera audio footage that was retrieved from the incident, other officers on the scene can be heard telling Villalvazo that it was a “Good shot.”

Police chief Andy Hall, who was not in charge of the department at the time of the shooting, declined to comment on the case, citing the pending lawsuit. However, the city’s Office of Independent Review ruled that the shooting was “within policy.”

Independent reviewer John Gliatta, one of the people responsible for this decision, claimed that the officer was justified in making the “split second decision” to take the boy’s life.

The basic idea in question here is whether or not a police officer has the right to shoot someone who is running away. Typically, someone who is running away from you is not a threat, but police often argue that a suspect can do more damage if they are able to escape, so shooting them and taking them down could save lives. However, critics argue that this bypasses the rule of law, and the presumption of innocence, because a person who is being detained by police on the streets has not yet been found guilty in a court of law.