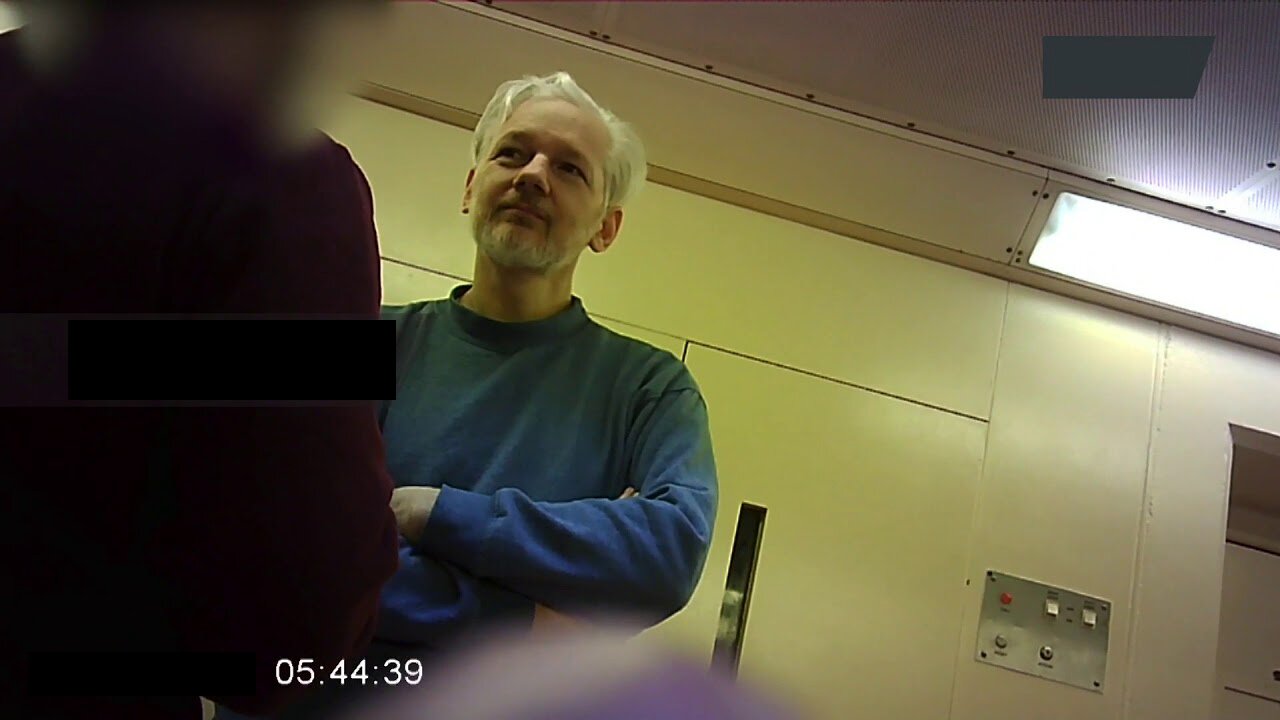 As we reported earlier this month, Julian Assange is gravely ill. The embattled WikiLeaks founder is currently being held under inhumane conditions as he awaits extradition from the United Kingdom.

Authorities are holding Assange at one of the worst facilities in the country, a place called “Belmarsh,” which has been compared to Guantanamo Bay.

Reports in recent weeks have indicated that Assange has been moved to the hospital ward of the prison, and that his health continues to deteriorate.

WikiLeaks has grave concerns about the state of health of our publisher, Julian Assange, who has been moved to the health ward of Belmarsh prison. – See full statement: pic.twitter.com/HnZVks4kWj

One of the few things that Assange was able to take comfort in, is the large volume of mail that has been sent to him by supporters.
Despite his ill health, it seems that he has been doing his best to reply to this fan mail. While it can’t be 100% confirmed that these letters are from Assange, they are in his handwriting, and they have been sent in reply to some of the people who wrote him.

Independent journalist Gordon Dimmack was one of the supporters who ended up receiving one of the letters that was attributed to Assange.

In the letter to Dimmack, Assange said:

“I have been isolated from all ability to prepare to defend myself: no laptop, no internet, ever, no computer, no library, so far, but even if I get access it will be just for half an hour, with everyone else, once a week. Just two visits a month and it takes weeks to get someone on the call list and a Catch-22 in getting their details to be security screened. Then all calls except lawyers, are recorded and calls are max 10 minutes and in a limited 30-min window each day in which all prisoners compete for the phone. And credit? Just a few pounds a week and no one can call in.”

“The US government, or rather, those regrettable elements in it that hate truth liberty and justice, want to cheat their way into my extradition and death, rather than letting the public hear the truth, for which I have won the highest awards in journalism and have been nominated 7 times for the Nobel Peace Prize,” he added.

Below are images of the letters for authenticity: 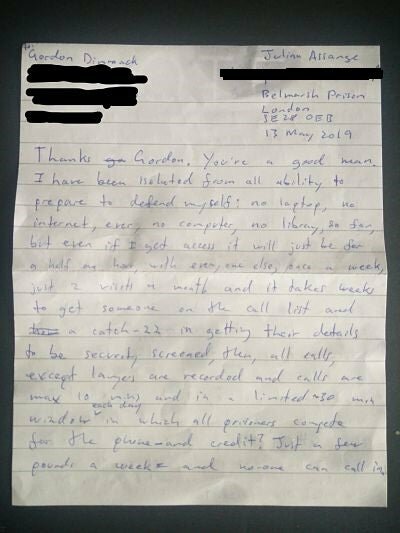 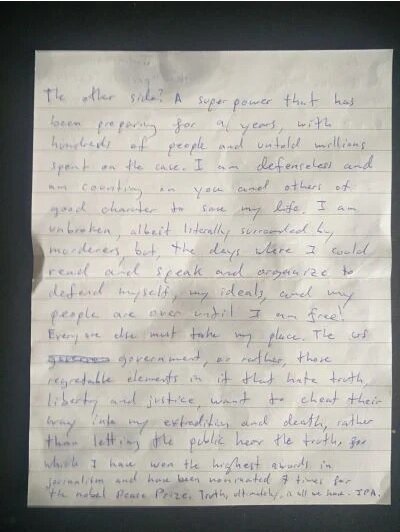 However, this week, video leaked from the prison showing some of the first days that Assange arrived at the facility. Assange can be seen laughing and joking with the other prisoners, who he is reportedly extremely popular with.

“Everyone’s got a million questions for him. He exposed the biggest scandals in the world. Whose side do you think someone in prison would be on? The government who have us locked up in here or a fellow prisoner who actually doesn’t deserve to be here?” the prisoner who leaked the video told reporters.

On May 23rd, Assange was indicted on 17 new charges under the Espionage Act, which together carry a potential prison sentence of 175 years.

When asked about his extradition to face these charges in the US, Assange told a judge that, “I do not wish to surrender myself for extradition for doing journalism that has won many, many awards and protected many people”.

The Justice Department announced that they will not be charging Julian Assange for his role in sharing secret CIA spying tools. They did this to prevent government secrets from being divulged during the trial. Assange also had a win in the Swedish courts, after prosecutors in the country determined that they would not extradite him for the charges that he is facing there.

However, the bulk of the charges against Assange still stand, and he is still facing life in prison for his involvement in WikiLeaks. It is possible that the United States government is only choosing to pursue the charges that are most convenient for their agenda.

The charges in Sweeden are related to an alleged sexual assault that occurred over a decade ago, but considering a lack of evidence, it was doubtful that prosecutors would have been successful. Assange is currently awaiting extradition to the US to face his most serious charges.