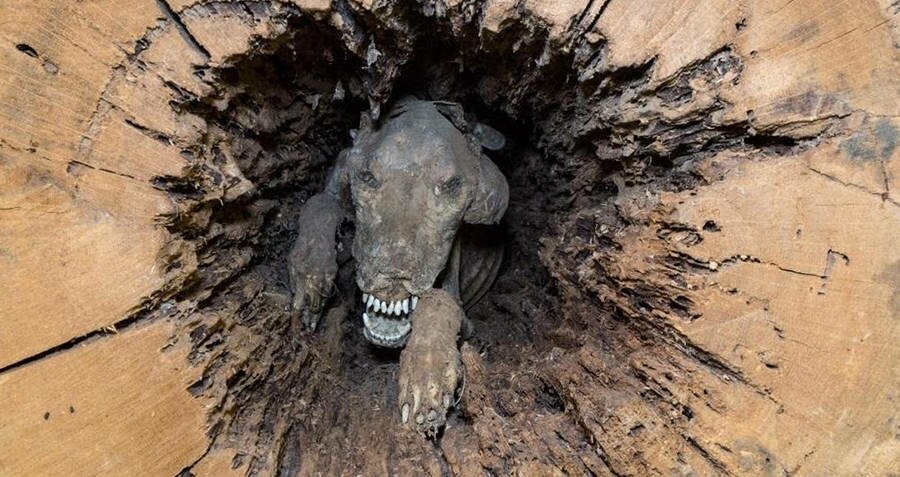 Stuckie the dog is an incredible, but disturbing sight that is now on display in a museum located in Georgia. The exhibit is a mummified dog that was found trapped in a tree roughly 40 years ago. The dog was found by a team of loggers who were working for the Georgia Kraft Corporation. The loggers found the mummified animal while they were cutting down a grove of chestnut oak trees in southern Georgia.

By chance, the crew did not cut through the mummified animal, but a member of the team happened to see the dog looking back at him from a hollow part of the tree. The story is tragic for animal lovers, as it seems the poor dog must have been trapped in the tree until its untimely death.

Stuckie the dog got his ironic name through a naming contest in for the museum in 2002. The name “Stuckey” won, while the runners up included Dogwood and Chipper.

Experts suggest that it was a hunting dog from the 1960s that likely chased a squirrel or other small animal through the roots and somehow got stuck in a hollow part of the tree. Instead of backing out, experts suggest that the dog panicked and climbed higher into the tree until it was entirely stuck inside. Eventually, the dog died of thirst and starvation.

Brandy Stevenson, Forest World’s manager, told Roadside America, “People always ask me, ‘How did he get in there?’ And I always say, ‘Well, he was a hound dog. Maybe he was after a raccoon.’

“And then they’ll say, ‘Poor old thing. I feel so sorry for him,’” Stevenson added.

The circumstances for the dog getting stuck in the tree were once in a lifetime. If the dog had passed away out in the wilderness, its body would be decomposed or eaten before very long.

However, the perfect conditions in the tree made sure that the dog was mummified for eternity. Oddly enough, the type of tree that the dog was stuck in contains tannins, a substance that is used in taxidermy. So not only was the dog protected from the elements, but it was also exposed to substances that are known to preserve dead bodies.

The dog is currently housed at the Southern Forest World Museum, still stuck in the same tree that it died in. 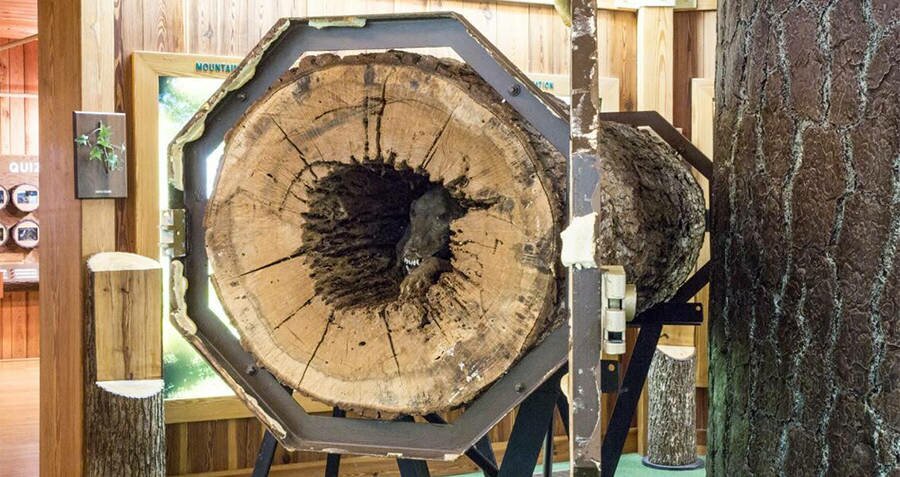 “A chimney effect occurred in the hollow tree, resulting in an upward draft of air. This caused the scent of the dead animal to be carried away, which otherwise would have attracted insects and other organisms that feed on dead animals. The hollow tree also provided relatively dry conditions, and the tannic acid of the oak helped harden the animal’s skin,” a display at the Southern Forest World Museum said.

While no one knows the full story behind this incident, it certainly seems that the owner of the animal wasn’t able to find the dog, or perhaps they didn’t care. Some hunters take good care of their dogs, but there is a very well known problem of hunters abusing and neglecting their animals, seeing them only as tools for the hunt.

According to Wide Open Spaces, “Animal shelters in the Mid-Atlantic and South brace themselves at the beginning of every year for an influx of hunting dogs, including hounds, beagles and Labrador Retrievers. The problem is especially evident in rural areas where hunting with dogs is common. In states like North and South Carolina, where coonhunting is popular, the hounds used for the sport regularly find their way to shelters after the close of the season on January 1.”

“In other states, shelters know January as “beagle season,” when volunteers see an avalanche of the popular rabbit-hunting breed. Shelter officials say the animals appear to have been set loose, since they show clear signs of being previously owned. In a January 2012 article, one North Carolina shelter worker said 60 percent of the dogs on her property were hounds bred for hunting,” the report added.

It is very possible that stuckie the dog could have been one of the many hunting dogs who are abandoned each year.