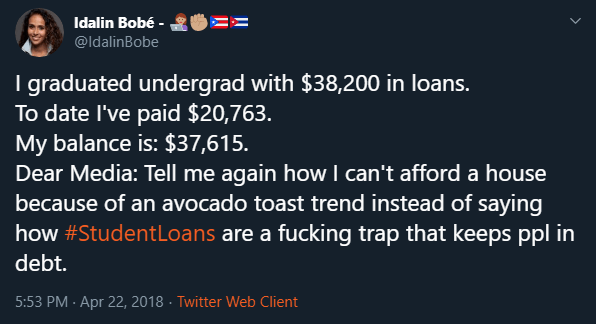 Student loan debt is a massive problem, especially in the United States, but despite the many of Americans facing unfair and unrealistic student loans, the government and even many citizens are entirely against any type of “bailout” for recipients of student loans. However, the government has no problem bailing out wall street or other large industries when they throw a temper tantrum about their profits.

Students of the class of 2017, who took out student loans, owe an average of $28,650, according to the Institute for College Access and Success.

Another contributing factor to this problem is the fact that most Millenials in the United States were told all throughout their high school careers that their lives would not amount to anything if they did not get into a prestigious college. This wasn’t even true 50 years ago, and it especially is not true now with all of the changes that have come to the job market in the past generation.

In these times, it really only pays to go to college if you are in a few very specific fields which require a degree or certification. The job market is only going to change more as artificial intelligence and automation take more of the factory and cubicle jobs that people have become so dependant on. As more cubicle jobs are taken by artificial intelligence, college degrees will become even more specialized and less relevant in the mainstream job market.

Below are some online posts talking about this trending topic:

Want to know just how big our #studentdebtcrisis is?

US college grads have $1.56 TRILLION in student debt. The GDP of Australia is $1.4 trillion.

"Telling me I need #college in order to get a well-paying job, only to find out 10 years after graduating that I'll need three well-paying jobs just to pay back the #studentloan? That seems pretty predatory." @OGpenn @KQED https://t.co/9hKPL4e3Zq

Nearly 20 years after beginning college, I paid off my #studentloans today.

I graduated from law school 6 years ago with $250,000 of student loan debt. But after years of hard work and tens of thousands of dollars of payments, I can officially say that I now owe $315,000.

Since graduating, I've paid off more than $110K in #StudentLoans & interest. It has slowed down my ability to chase dreams, accrue wealth, plan for retirement, and provide for my son.

It's still not a slap in the face to cancel student loan debt. It's the right thing to do.

I have officially paid off my #studentloans! So that only took 22 years. Now what? I feel like this means I should go back to school.

Since 1987 when adjusting for inflation, the % increase in:

This is student debt crisis in a nutshell.

Jordan dropped out of Morehouse College due to student loans.

Two years later, he watched a billionaire pay off his graduating class's debt.

We have a $1.5 trillion student debt crisis and we cannot wait for the generosity of billionaires to solve it. pic.twitter.com/skWKvn4Z57

When I was 17 I went to get a Limp Bizkit tattoo and when they wouldn’t let me because I didn’t have a guardian’s approval, I cried and punched a lamp post. 3 months later I was allowed to take on $119,000 in loans to go to art school.

I graduated undergrad with $38,200 in loans.
To date I've paid $20,763.
My balance is: $37,615.
Dear Media: Tell me again how I can't afford a house because of an avocado toast trend instead of saying how #StudentLoans are a fucking trap that keeps ppl in debt.

This country needs Architects, doctors, lawyers and engineers, but we are punished for success. Our education system is broke. #StudentDebtCrisis